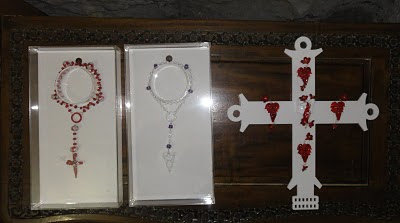 Award-winning glass artist Lisa-Jane Harvey contributed three works to the Legato exhibitions. These are her works and text below: 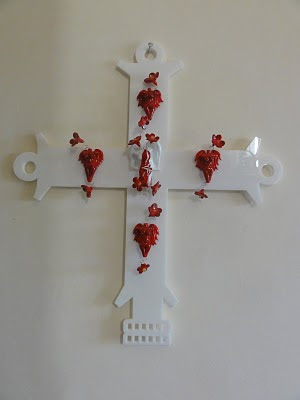 “In War we find Peace” (White cross with red angels)

Even in war Humanity can exist. During the battle of Monte Cassino in the third attack, the evening of March 16 1944 soldiers witnessed an evening of sheer terror and open war fare. The following day March 17th German and Allied forces put down their weapons and observed a temporary cease fire to assist the wounded and honour the those fallen. During the window of peace in such a savage battle soldiers shared cigarettes, exchanged stories and placed wagers on who would win the war.

The Red Cross is the symbol of humanity and peace in any war, it seeks respect for those fallen and wounded. Angels who guide those who have fallen and protect those who are wounded choose no sides, they offer compassion, they give us a message of Peace and Commemoration.

“In war we find Peace” seeks to invoke a sense of respect. 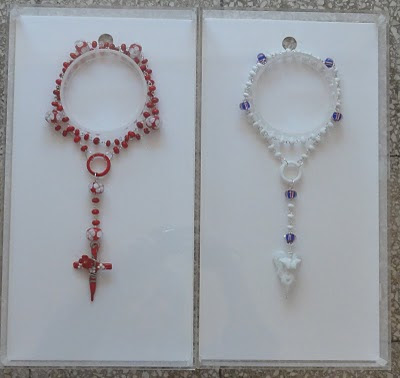 “Pray for our souls” (Red Rosary with Glass Cross)

Inspired by the beauty and significance of the Holy Rosary, “Pray for our Souls” seeks to honour and commemorate the thousands of women and children that were raped in the aftermath of Monte Cassino.

Montecassino was captured by the Allies on May 18, 1944. The next night, thousands of Goumiers and other colonial troops swarmed over the slopes of the hills surrounding the town and in the villages of Ciociaria (South Latium). Over 2,000 women, ranging in age from eleven to 86, suffered from violence, when village after village came under control of the Goumiers. Civilian men who tried to protect their wives and daughters were murdered without mercy. The number of men killed has been estimated at roughly 800.

The mayor of Esperia, a comune in the Province of Frosinone, reported that in his town, 700 women out of 2,500 inhabitants were raped and that some had died as a result. According to Italian sources, more than 7,000 Italian civilians, including women, children and some men, were raped by Goumiers
“Pray for our souls” seeks to not let this be forgotten

“Our Father who art in Heaven” (White Rosary with Angel)
In prayer we find solace. “Our Father who art in Heaven” is a tribute to all soldiers throughout the history of time that have lost their lives and passed over. The Rosary is symbolic of the power of prayer and the Angel seeks to send a message to God to end all war and protect our future. This is a tribute to my Great Grandfather Samuel Cash, who fought in BOTH World Wars.

World War Two connections
Lisa-Jane’s great grandfather, Samuel Cash fought in World War and was present at the Battle of Dunkirk and part of the British Expeditionary Force (BEF). Samuel was sent home with injuries after being evacuated. His stories of bravery, fear and loss from the high casualties in the war are a reminder of the many men who gave their lives in the fight for freedom and human rights.
Posted by Kay at 04:07