Looking Back, and Moving On 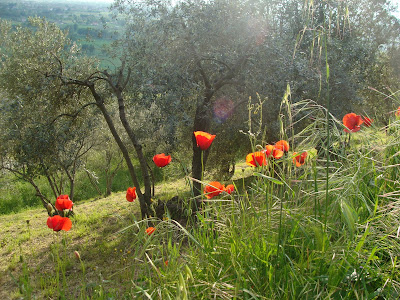 This week Legato in New Zealand draws to a close. It is still several weeks until the Cassino, Italy (2011) version of Legato opens.

Unlike the first exhibition in Italy, the Wallace Gallery exhibition in New Zealand was partially selected, and had a striking variety of works included. Works too big or too heavy to send to Italy last year took their deserved places and added to the power of the display. The diversity reflects our nation, and the soldiers we are commemorating.

The decision to make the first Legato open to all comers rather than a selected exhibition came from the desire to raise awareness in New Zealand of the stories soldiers have held within them all these years, providing an avenue for communication between the generations. Soldiers returning to Italy make it clear that there is a time when these stories need to be told, when they need to make their peace and calm the images and memories they have carried with them for so long.

Research for Legato became a place where stories could be shared, unspoken questions answered, and history brought into families.

The variety of artwork that travelled to Italy was interesting, presenting a very satisfying challenge to pull it into a cohesive exhibition, and the result was a space for contemplation as well as for feeling another culture on foreign land. Entering past peaceful, reflective works the viewers were then drawn in to the personal, challenged to put themselves in the place of the soldiers and their families, and then drawn out again past paintings of the physical scars, recognisable and less haunting perhaps because they were tangible objects rather than personal stories.

But more interesting perhaps, certainly from a sociological point of view, were the emails that accompanied many of requests to be a part of the exhibition. Many families were seeking to understand the men who had returned to New Zealand, the fathers and the grandfathers who were tough, were aloof, or were in some other way unreachable.

Researchers now seek answers from diaries, from oral histories, and from memorabilia. We seek to understand how our nation has been shaped by this generation of silent, and sometimes violent, men. We don't often talk about the suicides, survivor's guilt, or the problems of rehabilitation. We ask about what it was like, being in the war. We hear selected memories, incomplete memories, white-washed memories. At times we hear stories that we know are untrue, where the pain has been so great that a new memory has been constructed, compensating for what cannot be faced. Nothing, however, can tell us what it really was like fighting this war.

Today, while researching a New Zealand Battalion for information for visitors coming to view the battlefields I came to this section:

That was the last day in this place. The two companies marched back to Sant’ Elia Fiumerapido, where the Rt. Hon. Peter Fraser, meeting the battalion on an informal visit, spoke about the 2 NZEF and rehabilitation plans. A few nights before this a battalion man had been yarning about prospects in a new job that was waiting him back home. Three or four comrades were sitting about in the calm dusk of an Italian evening. The conversation had drifted to news of home. This man pulled out his wallet and handed round photographs of his young wife and small baby, of his parents, and the new home which was waiting his return. ‘Somehow,’ writes Padre Sullivan, ‘we came to know the people he spoke about, and began to share something of their lives, and his.

‘The next morning at 7.0 a.m. we buried him. There were only three people at the grave, which was dug out on the top of a mound and overlooked a valley below, with whole fields of red poppies blowing gently in the breeze.

‘Just as the simple service began, up staggered one of his friends, who was en route to the front line. He stood there, a big, hulking fellow, heavily accoutred as for war, tin hat on his head, rifle in one hand, and in the other he clutched half a dozen wild red poppies. He was dumb and inarticulate, but this tribute he felt he must pay. There could not have been a simpler cortege. It is doubtful if there could have been a more splendid one.’

Perhaps most powerful in any story is that which is left unsaid.

One of the unexpected things that has been achieved through Legato is that the Italians here now understand the importance of the poppy to New Zealanders and others. They know well that it is important to the Polish, but often questioned me about why we wear the poppy, and leave so many of them at the Commonwealth cemetery.

Several artists wrote and asked "is it being too obvious if I include a poppy in my painting?" No, it is not too obvious. The poppy which blooms so freely here is always going to feature somewhere. And usually the artists who asked the question were the artists who thought most deeply about their work and, whether they used the poppy symbol or not in the end, their works carried the message of remembrance well.

Prior to writing this blog post I had been sitting on the hillside above the Liri Valley, twenty minutes drive from Cassino, wondering how many land mines had been cleared from the garden below me. One killed the owner of what is now my apartment. He was on his way to assist a farmer down below, injured by another mine. I heard yesterday that he died under a fig tree. Was it the tree in my garden that I gather figs from every season? It probably was.

The scars of this war are far closer to the surface here. Some stories are told over and over, few remain hidden. Some injustices are still very much to the fore of people's minds. But back home in New Zealand, where noone else could understand what sights and smells and fears had been endured, where soldiers didn't want their loved ones to know how terrible the fighting really was, our soldiers simply buried these images and memories inside.

A favourite quote is from Michael Shepherd. I make no apology for having used it before.

…every time an action passes there is a memory
and thereafter the memory is about the memory of the action.
And slowly we have this fine silt, the stuff we call history.

History is not confined to the pages of the books, the official records, the memorabilia in the museums. History lives within us, generation after generation, as we struggle to pick up the pieces left by war, and to find peace.
Posted by Kay at 04:02 2 comments:

Ceremonies for Commemoration and Peace

From Cassino to London, sharing the message of peace: 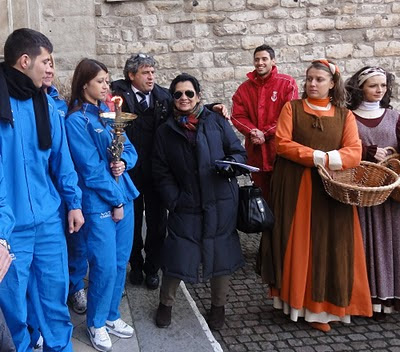 Wednesday 2 March was the Lighting of the Benedictine Peace Torch at Westminster Abbey, the beautiful Gothic cathedral originally established by the Benedictine monks in the tenth century.

A Service of Blessing for the Benedictine Torch took place at Westminster Abbey on Wednesday 2 March at 12 noon.

In 1964, when Saint Benedict was proclaimed Patron of Europe, it was decided that the lighting of a torch would take place as a symbol of European heritage. The torch is now known simply as the Torch of Saint Benedict. Every year it has been the main feature of a pilgrimage beginning from the city chosen to light the torch and ending in Montecassino at the Shrine of St Benedict.

Westminster Abbey was the first non-Roman Catholic Church to host the lighting of the Benedictine Torch.

The service, in English and Italian, was conducted by the Dean of Westminster the Very Reverend Dr John Hall, who said in his Bidding: ‘The Benedictine community of monks, who built this great church to the glory of God, whose worship of God echoed around these walls and whose tombs and memorials surround us, flourished here for at least 600 years.

‘Four hundred and fifty years after the dissolution of the monastery, their prayers and example continue to encourage us as daily we worship almighty God in the opus Dei of psalms, hymns, and spiritual songs and as we celebrate the sacraments of our salvation, above all the sacrament of the Eucharist, of the body and blood of our Lord Jesus Christ.

‘It is a particular joy here in the coronation church, so central to the religious and secular life of our nation, to light the Torch of Saint Benedict that symbolises the light of Christ that shines at the heart of British and European civilisation, the light of peace and goodwill for all men and women in these islands, in Europe, and in the world.’

The Dean and Archabbot Pietro Vittorelli OSB of Montecassino washed each other’s hands as a symbol of welcome and hospitality.

The Addresses were given by the Right Reverend Stephen Platten, Bishop of Wakefield and Chairman of Governors of the Anglican Centre in Rome; and the Archabbot of Montecassino.

Prayers were led by the Revd Dr James Hawkey, Minor Canon of Westminster.

The service was sung by the Choir of Westminster Abbey conducted by Robert Quinney, Sub Organist. The organ was played by James McVinnie, Assistant Organist. 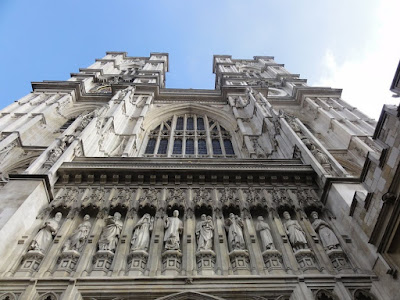 Prior to the torch ceremony I had the privilege of laying a wreath at the Tomb of the Unknown Soldier to remember the Commonwealth soldiers who fell in WWII. This was on behalf of the Monte Cassino Foundation for Remembrance and Reconciliation. This Foundation, like others, sees Cassino as an international meeting place where friendships have been, and are being, formed in the spirit of reconciliation and peace.

The following photos of the wreaths and the ceremonies inside the abbey are from the Facebook album by the tireless organiser, Michele Di Lonardo. 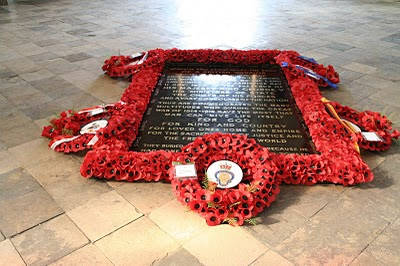 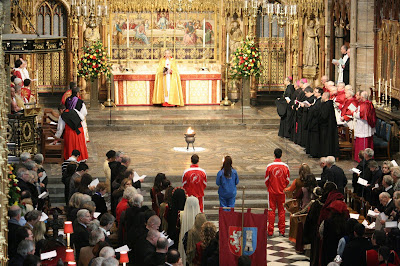 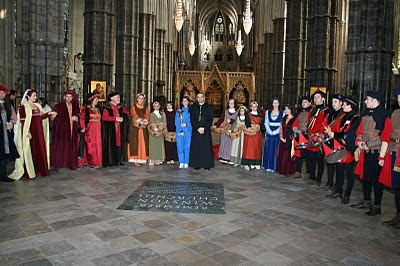 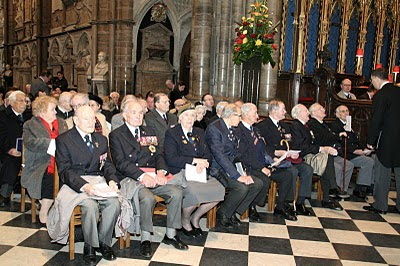 Later in the evening at an international conference for Peace and Reconciliation I was invited to speak and shared the vision of Legato with guests including veterans from Germany, Poland, England, and Italy. Thanks go to Michele Di Lonardo (Cassino) and Richard Wassell (Monte Cassino Foundation for Remembrance and Reconciliation) for this opportunity.
Posted by Kay at 15:40 No comments: