They Died, for What?

Tomorrow at Caira is a ceremony for the 20,000 German soldiers who lie, six to a headstone, on their bleak conical hilltop near Cassino. Two days ago it was Remembrance Day, with ceremonies in far-flung places, and more to come tomorrow, Sunday. It is a time to remember all soldiers, and civilians too, and consider that there are no winners in war. The surviving soldiers were victims too, and societies continue to suffer from events that happened more than 65 years ago.

I was browsing "Remembrance Day" and Google produced a Canadian story (click here) typical of scenes all over italy.

Once Armistice Day, and renamed after WWII as Remembrance day, the moment of the 11th hour of the 11th day of the 11th month each year is often commemorated on the Sunday closest to the 11th of November. This link has a comprehensive coverage of the history of the day, written for children. Please note the section added in grey, the text being:

Sadly, due to the current intensive operations, the names of many young men and women are now being added to war memorials throughout the land.

We give thought also to the many who are injured but, due to the miracles of modern medicine, are increasingly surviving with horrific injuries.

So, on Remembrance Day, we remember these people as well as those from the two great wars. The challenging sculture by Dave Fowell asks what the civilians of Cassino would think, if they returned to look at the world now. Have we achieved the peace that "we" were fighting for when they lost their lives? Artists exhibiting in Legato had differing opinions.

Dave Fowell at Legato, Italy 2010 from Nicola Blackmore on Vimeo.

Dave Fowell suggests that nothing has changed, but argues that war is not the way to make changes for the better, while Averill Stuart-Head believes that soldiers able to return 65 years later would be satisfied that gains had been made and that the younger generations have better lives because of their sacrifices.

Quilted wall hangings by Averill, "Postcards to Peace" and "Doorways to Peace".

Averill Stuart-Head at Legato, Italy 2010 from Nicola Blackmore on Vimeo.

Averill speaks about her work and the soldiers who lost their lives.

Averill says that "Peace is so fragile, and we have to look after it". How easy it is to forget that, and how tragic the consequences when we do.

Works below: Collages by Averill, "Fragments of Peace" 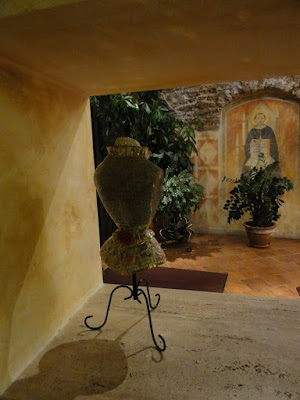 Legato (Italy 2010) is now all in boxes, packed ready to return to New Zealand. Some work is already safely back in New Zealand, so my sincere thanks go to the artists who took work back with them, some also taking work for others. Some is in the post, some has been posted and bounced back to me from customs, and other works are waiting until the intricacies of exporting artworks can be negotiated - that is, until I can get it all signed off in Rome.

Some generous artists have decided to donate their works to public spaces in Italy, and as soon as the madness of olive picking is over I will place these works. It's not only my own olives causing hold-ups, but the whole region slows down as people return to the countryside to make wine or pick olives. Frustrating perhaps for outsiders, but it is part of the charm that is Italy. You can cross hundreds of years in a day, if you happen to pass a woman carrying her supplies on her head, or an old man leading a mule laden with firewood up cobblestone paths, then look in on an oil press where the latest of technology is gleaming next to cane baskets of olives. I need to talk to the vice-mayor about placing some of the works, but he happens to own the local olive press... pian-piano, as they say here, or (in NZ) "good things take time".

Next week I should be back at my own computer, and luckily my data was salvaged and survived the reformatting of the hard drive. Then I will be able to access more readily the photographs and data I need for this blog.

In the meantime, above are more photos of Janice Corbishley's work which went "on location" to the restaurant at La Locanda del Castello for an evening a few weeks ago, before it was safely delivered home to New Zealand by a travelling artist.
Posted by Kay at 03:24 No comments: