I was very impressed by the documentary production entitled "The Phoenix" from Grand Island Films. (Update: sorry, it seems that this link is no longer public.  I hope it becomes available again). This representation of the Battle of Cassino is based on the history of the Benedictine abbey on Monte Cassino, and begins with the ancient Egyptian story of the Phoenix.

It is refreshing to see an informative documentary which is clear, balanced, and talks about history without creating heroes.   There are no winners in war.

While watching this video to find something I wanted to quote, I decided that this interview with Margherita Giampietri is well worth sharing again.  I was reviewing her words at around 6 minutes 28 seconds, but her comments about the difference between growing up in post-war Italy and being in a country that was not occupied coincide with another conversation I have been having on Facebook.

Margherita Giampietri at Legato, Italy 2010 from Nicola Blackmore on Vimeo. 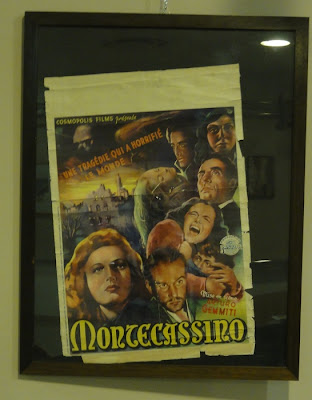 MONTECASSINO IN THE CIRCLE OF FIRE
(Italy, 1946). Directed by Arturo Gemmiti.

There is no "real" history, only constructed history.  That is, apart from the dreadful and indisputable fact that in a war people are wounded and killed.  I don't mean to challenge with that statement, but recent events have set me thinking along those lines again.

When we read something published in a book we generally consider it to be fact.  If an entry on the web is from a reputable site we take it to be correct.  When we see something in a film it leaves an impression that is hard to erase.  How much truth is in what we have accepted as reality is open to debate.

Films such as Saving Private Ryan have become part of the social record of history.  They are creating a new  memory, a new history too.  In terms of raising social awareness they do an excellent job, bringing the "reality" of war to the general public.  But no matter how thorough the research, there is no "reality" in any production.


…every time an action passes there is a memory and thereafter the memory is about the memory of the action. And slowly we have this fine silt, the stuff we call history.

We have many kinds of memory, gap filling memory, compensatory memory, episodic memory to name just a few.  It is well known that six people witnessing the same event will give six different accounts of it.  And so it is with "official and unofficial" history, with articles, books and films.

Now, as the 70th anniversary of the liberation of Cassino approaches (May 2014), we see many documentary makers and film makers scurrying to interview veterans and civilians, to record the memories before they are "lost".  I suggest that the memories are more like fine silt, difficult to capture and elusive in nature.  One veteran said "I can no longer tell what is my own memory and what parts of it are from things I have read or seen on telelvison".  In such instances the memory is the product of somone else's (possibly erroneous) writings or recordings.

A quick "google" shows up many documentaries, including (chosen at random) this one from 1943.  Images in many of these documentaries include staged footage, reconstructions, and of course the editorial bias of the film makers.

Researcher Perry Rowe has dedicated countless time to locating the sites of photographs published as "Cassino" or "near Cassino", differentiating between reconstructions and real footage in "Faking Monte Cassino"  (issue 142, After the Battle). His work is fascinating. Many of the reconstructions were for propaganda films "to support the war effort".

There are not so many films about Monte Cassino, and I have not yet seen the one in the poster above.  The poster was kindly loaned to Legato earlier this year by Alberto Mangiante. Mauro Lottici mentions the film in his article on the website Dal Volturno a Cassino.  He writes:


The film [MONTECASSINO IN THE CIRCLE OF FIRE Italy, 1946. Directed by Arturo Gemmiti] uses a heavy hand toward the Germans, and the velvet glove for the Allies. For the scene of the bombing of the monastery used a model, perhaps the original footage of the destruction was not yet available in Italy.

That it is not based on unbiased fact is clear, but does "unbiased fact" really exist? And, in light of all the divergent "memories" that emerge, is it not better to understand why we feel the need to alter facts rather than be too critical of those individuals who change things in memory to suit their own psychological and emotional needs?