New Zealand artist Ira Mitchell-Kirk, whose painting Hold on To Peace heads this blog, has contributed three smaller works this year with a focus on peace. 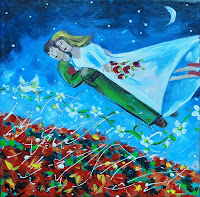 Love is a Time Traveller 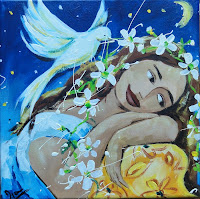 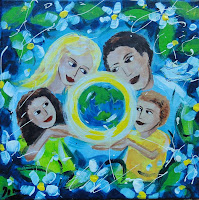 Coming Together for Peace

These works, along with other smaller works, will be exhibited on the display shelves of the exhibition space used in Corso Della Republica, Cassino.
Posted by Kay at 05:38 No comments:

These works are part of an extensive body of exploratory works by New Zealand artist Robyn Hughes. 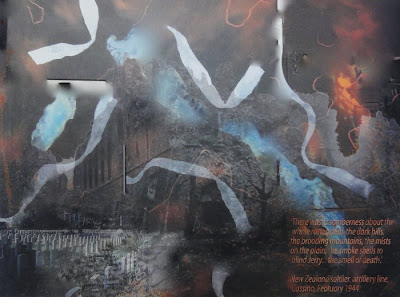 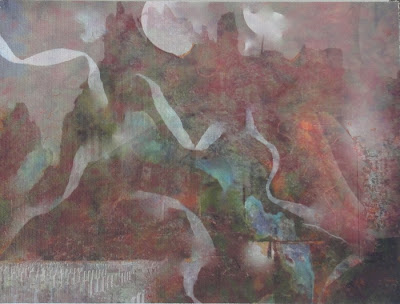 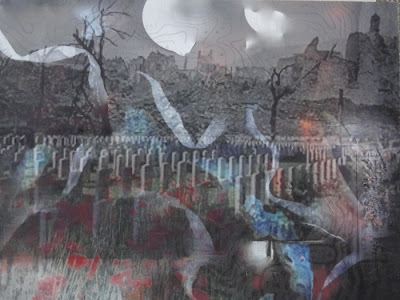 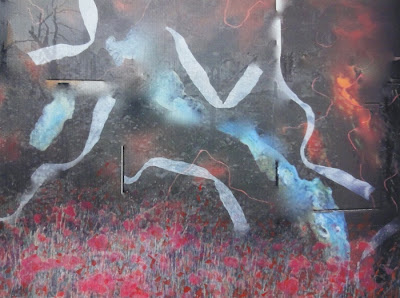 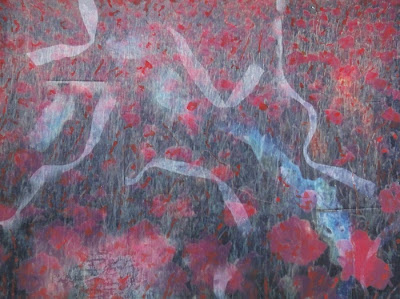 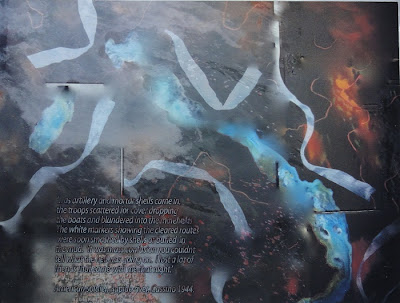 My father was a Major in the 19th  Armoured Regiment, part of the 2nd New Zealand Corps that served in Cassino, Italy during WW2. He was one of the lucky ones to return home. He rarely mentioned his wartime experiences. Instead he celebrated family life and together with my mother built up a business in Auckland, New Zealand.

My generation grew up in peacetime and it is almost impossible to imagine what my father’s generation had been through in the war. Regrettably I never asked him that question. He died in 1968 when I was 18 years old.

This series of work is the outcome of my own recent research into the story of Cassino and why it had such significance in the Italian campaign of WW2. I have looked at official accounts of military history and have read poignant personal stories from people who were present at the time - from both sides. I have visited Cassino on numerous occasions, taken site photographs and have studied historical photographs and maps.

Throughout all accounts, the geographical terrain of the Cassino area has been described as ‘ treacherous’ in a war time situation. The Benedictine Abbey perched high on Monastery Hill, the surrounding steep mountains and ravines, the myriad of rivers and the harsh winter conditions of 1944 made life a misery for everyone who was there. The huge loss of life of civilians, military personnel of all nations and the pack animals that supplied the troops on their dangerous night time mountain treks is traumatic reading.

In the series of large paintings that I am presently developing I have used the notion of ‘terrain’ to present a psychological state of mind of trauma and chaos. I have depicted the terrain as surface that is torn, pierced, stained and threatening. I have manipulated the viscosity of the paint to create running, molten effects and to evoke a mood where visibility is limited, confusion is paramount and danger ever present.

In the smaller mixed media works that I am presenting at Legato 2013 I have used a combination of my own photographs and drawings juxtaposed with historical source material.  I have selected, overlaid and manipulated these layers of information using both digital means and paint.

From my position of artist - researcher, who was not present at that time my goal has been to try to understand the complicated mosaic of events that took place and to bring visual form to the Cassino story in a way that is both poignant, informative and respectful.
I have referenced particular motifs and have repeated them throughout the work eg. The white marker tapes laid on the ground as an attempt to guide the soldiers with a safe path through the minefields, the poppies as a symbol of sacrifice and the’ sea of graves’ in the many graveyards that we now see situated throughout Cassino.

I have also chosen to include text in some of the works to bring to the fore the ‘soldiers voice’ as the prime narrator.  In this way I hope to place authorship of the work back into the hands of those who fought and died in the battles of Cassino and to acknowledge and honor the enormous sacrifice that was made by people from so many nations. 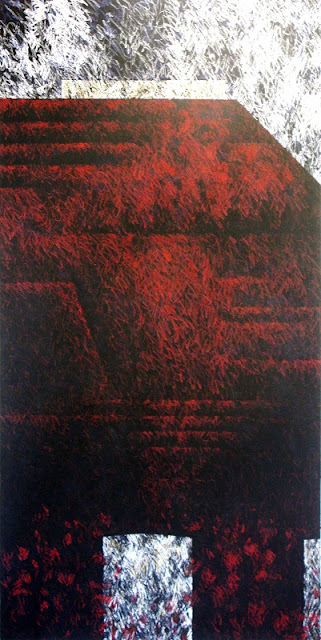 The title "Red Earth" came via P J Harvey's lyrics "The Colour of the Earth" from the CD Let England Shake. She sourced the words of Vic Nicholson as used by the New Zealand author Maurice Shadbolt in "Voices of Gallipolli". The reference was to the post battle colour of the earth being the colour of blood.

The painting directly refers to the Monte Cassino landscape - the graves with red roses, the monastery and the hill itself with its terracing taking on the appearance of steps. It reaffirms that there was blood soaked earth and that the blood is in effect still there, forever part of the hill. The image is however one where the process produces a dematerialising effect, reflecting that history, legend and myth are over time becoming the only remaining experience of the events that are directly accessible, emerging from the darkness and indeterminacy of memory.

Towards a Brighter Future

This painting was my way of pulling up my spirits after spending a lot of time studying sad photographs and painting for the Legato exhibition in 2012. Commemoration brings sorrow, but the legacy left by those who gave their lives is one of peace and democracy, and the hopes and dreams of a positive future.

As the Legato exhibition is about both commemoration and peace, this brighter poppy work was exhibited alongside the sombre paintings of destruction and sorrow. It is hard to imagine now that all of this land was a battle field. 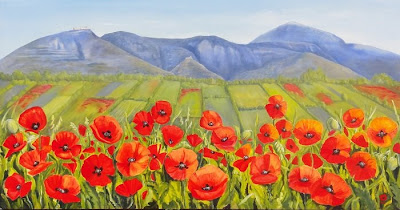 This less photographed view of Monte Cassino (to the left of the painting) is from the road near the new Cassino hospital. Monte Cairo is to the right of the painting, while Rocca Janula is in the centre. 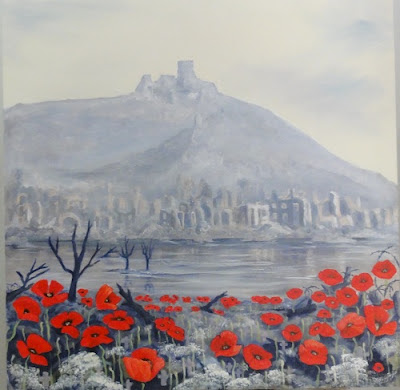 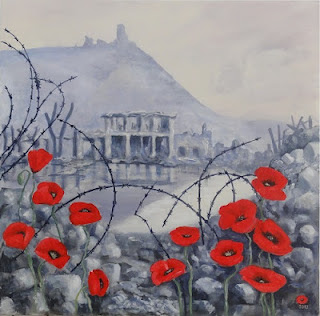 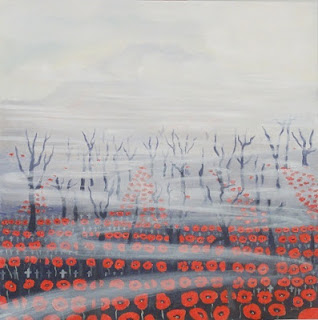 These works, together with the one shown in the previous blog post, were painted for the 2012 edition of Legato and will be shown again this year.

Based on photographs of the area after the bombing of both the town and the abbey, these studies, apparently in shades of grey, have in fact many colours within them. The colours are subdued, reflecting the sombre theme. In contrast, the bright poppies both recall the lives lost and give a message of a new start, as the poppies in the fields appear each year no matter what the land use, or how difficult the season.

After painting these I found myself in a difficult, sad space; too much contemplation of death and the loss of hope for individuals, of sacrifice and of suffering both on the battlefield and for the waiting families, is not good for an artist. In response to this I painted a large, more positive painting of Monte Cassino, showing the land as it is today, fertile, alive, with no hint of the tragedy of the battles in the painting. (This will be shown in another post).

If poppies are for commemoration, then let us paint them with reverence, let us remember with respect and honour, but let us also move forward in peace.


Kay de Lautour, artist and curator of Legato.
Posted by Kay at 14:21 No comments: 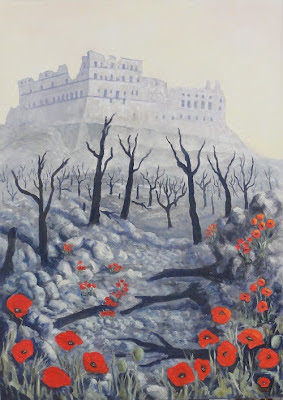 This year Legato will be hosted by the Cassino Comune in the Sala Restagno, in the "city hall." While this is a smaller display area, it will be the centre for many meetings and discussions regarding the commemorations of the battles for Cassino so I am hopeful that it will be a popular and accessible venue.

Smaller works will be displayed in the exhibition window of the Banca Populare del Cassinate, in Corso della Replublica. These works will be seen by a much wider audience as passers by in this major shopping street will have a chance to view them on a daily basis.

I am sincerely grateful for the support of the Comune di Cassino, Cultural Assessore Danilo Grossi, and Pro Loco Cassino, and for the use of their display area I thank the Cassino branch of the Banco Populare del Cassinate.

Above: Untitled acrylic on canvas, 2012, by Kay de Lautour.
One of a series of four paintings.
Posted by Kay at 05:34 No comments: