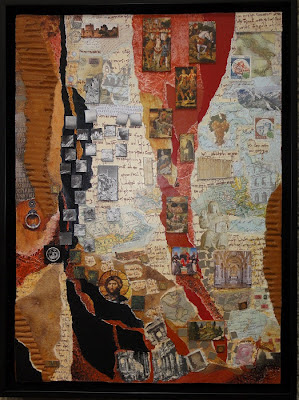 This mixed media collage by Nancy Stevens will feature in the 2012 Legato exhibition at Cassino.  It draws on the rich cultural history of Italy, as well as the geographical extremes linked forever by the history of the Battles of Cassino.

The work has a mixture of relief and textured work, with contrasting colours and materials coming together to tell a fascinating tale using metaphor and historical references.

Nancy Stevens was a scholarship student at the Montreal Museum of Fine Arts and completed her art education at with the degree of Bachelor of Fine Arts.

Employed by CBC Television as a graphics artist she continued to work part time after her marriage and while raising two daughters.  When time permitted she painted and began to exhibit her realistic acrylics. During the 1980’s she was represented by a major gallery where she had sell-out shows every two years.

Stevens left that successful career to experiment with media and methods which resulted in HORIZON PAINTINGS, a 1995 exhibition of abstract paintings at the Art Gallery of Nova Scotia, and IN TRANSIT, an exploration of autobiography in 2001.  Her most recent exhibition, PATHWAYS, opened at the at in January 2010.  Her work is represented in significant private and public collections in .

After a 15-year career of teaching drawing and painting, creative and critical thinking, Stevens lives in where her studio overlooks the ocean and her vineyard.
------------

Collage seemed like an appropriate medium to explore the meaning of Montecassino.   Layer upon layer, century after century, its history and culture evolved from a pagan temple to the richly embellished spiritual home of the Benedictines. More recently, Montecassino became a memorial to the tragic events in WWII which caused its destruction.  A tourist attraction today, the restored abbey is a reminder that in “the global village” war is not an option.

The works that arrive early for the next Legato exhibition in Cassino will be published on this blog in the next three weeks.  This year there will be a section for photographs to complement the art works, and artists will be painting on site during the exhibition.

Also on display will be the beautiful and most sensitively written and illustrated children's book "Anzac Day Parade" by Glenda Kane and Lisa Allen, and the recent publication "The Battles for Cassino Then and Now" by Jeff Plowman and Perry Rowe.  Artists who travelled to Italy in 2010 were lucky enough to have Perry guide them through some of the history of the Battles of Cassino as they toured the area by bus.

Michele Di Lonardo (Proloco, Cassino) has kindly offered to organise the photographic section and the inauguration of the exhbition this year, and this assistance is much appreciated.  Last year Michele translated the floor talk by featured artist Regan Balzer for French visitors.

The exhibition will be in the Sala Pietro Malatesta at the Biblioteca Comunale, the same venue as in 2010 and 2011.

There are no artists travelling from overseas to participate this year, a sign of the financial times and also a result of people waiting for the bigger commemorations on the 70th anniversary of the battles in 2014. My thanks go to those who have already delivered or sent artworks for this year's exhibition.
Posted by Kay at 15:39 No comments: