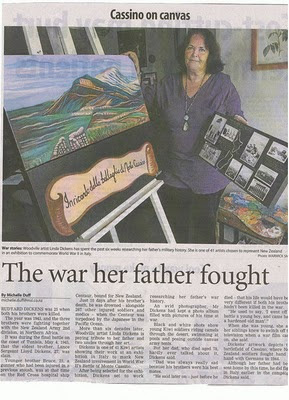 Linda Dickens, like many post-war children, grew up aware that the war films on television were not easy viewing for soldiers returned from war. Her father, Rudyard Dickens, says that he went to war a child and came home a "hardened old man". He signed up at 22, married his sweetheart and then set off for war.

By May 1941 he was serving in Sicily. When he was 25 his two brothers, aged 27 and 23, died far from home. The elder brother was killed in Tunisia, and the younger, wounded before that and invalided out, drowned when the hospital ship he was in was torpedoed by the Japanese in the Pacific Ocean. So close to home, but yet so far away.

Rudyard himself continued on to fight on in Luster Force with the 6th NZ Artillary. He achieved the rank of Seargent Major when he was serving in the Middle East. He returned to New Zealand in 1943 and was recalled to serve in the Pacific in April 1945.

Linda chose to pair a painting of text with her representation of Monte Cassino. Over the landscape hangs a painting of a banner bearing the words "In memory of the Battle of Cassino", translated into Italian.

Linda's research prior to painting these works was a journey of discovery. By applying to the New Zealand Defence Forces Personnel Records for his records, she was able to learn more about where her father was during the war. Her father had also been a keen photographer and had albums of photographs taken when on active duty.

Linda has very kindly donated her works of remembrance to be displayed in a public building in Italy.
Posted by Kay at 10:17