Painting the Realities of War 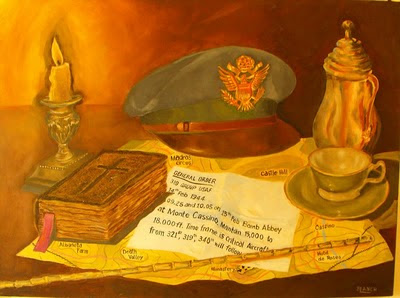 Work by Stan Blanch, New Zealand artist resident in Australia, notes the decision making and instructions leading to the bombing of the Bendictine Abbey on Monte Cassino. 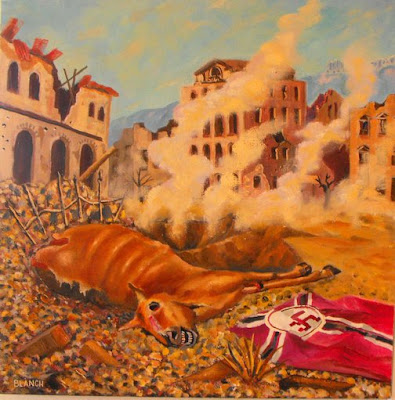 In his second work Stan references Picasso's "Guernica" where the dead horse is a symbol of the death and destruction of war. Behind the horse are the ruins of the Abbey.

It was interesting to watch the reactions of viewers to these works at Cassino. Men pondered at length the work depicting the decision to bomb the abbey, while women reacted with horror at the clarity of the message of destruction when they encountered the work with the very graphically painted dead horse.

One work was a place for careful consideration of options and military strategy, the other an uncomfortable reminder of the grim realities of war. That some were also uncomfortable with the placing of the German flag beside the horse seems to indicate how far we have come with peace and reconciliation since the dreadful events of WWII.

Images that challenge certainly help to clarify one's thoughts and this was the case for some viewers with both of Stan's paintings.

More than one viewer checked with the curator and the catalogue to confirm that both works really were painted by the same artist, indicating how closely they were studied by the viewing public.
Posted by Kay at 22:33