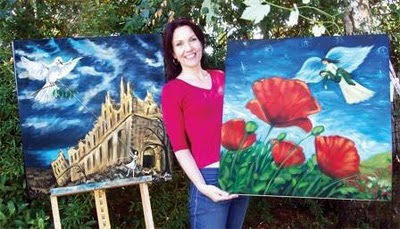 Entries have closed for the May 15 to 29 event at Cassino. Organisers Kay de Lautour (in Cassino) and Auckland’s Sophia Elise said the exhibition would be the biggest single New Zealand art event ever held in Italy.

The commemoration art event has been labelled the Legato exhibition. De Lautour said legato in Italian meant intertwined, like strands of rope, giving it strength.

"Of course it is also a great song, and in that context the image is beautiful; and so it is with Italy and New Zealand, with so many friendships formed between families during WWII and maintained after the war.

"Now, two generations later, the grandchildren of the Kiwi soldiers are returning to Italy to visit these families, and young Italians are moving to New Zealand. Every year hundreds of New Zealanders visit the graves of their countrymen who remained here.

"The horror of war has passed into memory, but the friendships are alive and vibrant. Nationally this connection may feel stronger in New Zealand where almost every family has a direct link to Italy, whereas in Italy there are many areas where other nations played a similar role and have these same ties.

"Legato means tied together. The legacy of war is part of our common heritage. Now it is our task to make a lasting peace the focus of that heritage. Kiwis are held in high regard around here. They are remembered for feeding the children, providing clothing, stealing army blankets for the cold,’’ de Lautour said.

The NZ art exhibition will be held in Cassino’s public library complex in the centre of the town with a formal gala opening on May 15.

New Zealand Art Guild manager Sophia Elise said the guild was overwhelmed with interest from artists to take part in the special event.
Posted by Kay at 14:39