Music and Images for Peace 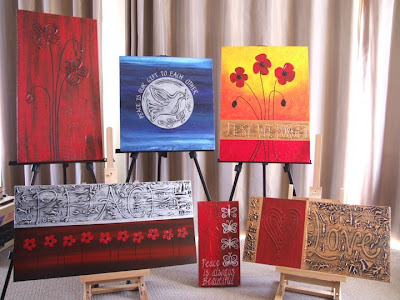 As some of the artists know, getting art work out of Italy is a difficult and expensive process. Artworks are seen as cultural heritage, and the protocol to take any art out of the country is severe to say the least. Some very generous artists have chosen to donate their work to local venues, like senior citizens homes. The work of one artist in particular, Angela Laby, I am hoping to place in schools as this work has text in English that would interest the children. (See photograph above). A picture is worth a thousand words, but when one grows up with words of peace in a picture seen every day, one must surely remember these for a lifetime.

The decision to work also with schools was affirmed for me this afternoon. I was invited to a school in Cassino to watch the end of year concert (a middle school, children around 12 - 13 years old I guess). This was in a fairly typical school hall, with excited children and throngs of parents. But the programme was far from typical. It was not about success and achievement, not about the school year. The theme of all the dialogue and songs was of sharing resources and cultures, of working to end poverty and oppression, and for peace. The theme appeared to be that Christmas is a time for thinking of others, and for understanding the true message of Christmas. This programme was not a "one off", but is repeated six times over two weeks to ensure that everyone has a chance to see it.

Each part of the world was presented with songs and dialogue, and finished with lighting a candle of hope for the children at risk in these places. Europe was represented in both French and Italian. The Americas were presented with both negative and positive stories, and the song (in English) "What a Wonderful World". When it came to Oceania I watched with much interest. What would it be? Children with painted faces, brown skivvies and tights, and "grass" skirts appeared... and to my amazement they performed a very convincing haka. This brought the audience to life far more than any other performance, and an encore was called for, not once, but twice. Later, despite two intervening acts of song and movement, as the hall emptied I could hear "Kamate, kamate..."

I waited behind to speak with the instructor, and to my surprise he knew much about the haka, the history, the protocol. This was no "dance rip-off" like the controversial car advertisement, but a true cultural exchange. Such is the memory in the town of Cassino of the performance of the NZ Army culture group in 2004.

This, together with a lovely book and photographs in today's post from Canadian visitors to Legato who said in their letter "Keep up the good work", has given me much heart.

Legato is a lot of work, finding funding is difficult, and at times it is a very lonely journey. Occasionally I wonder why I spend so much of my time and energy on this project. Then, when I see the generosity of artists, see how the art works move visitors, and remember the stories told to me by visiting veterans, I am very sure that, despite all the difficulties and frustrations, "the show must go on".

Thankyou Angela, for responding positively to the proposal to donate works to the people of Cassino. Today I think I found the right place for your messages of peace.
Posted by Kay at 11:33