These four paintings from the 2012 Legato exhibition were also at the Teatro Romano, Cassino, on the occasion of the world premiere of "The Juniper Passion". 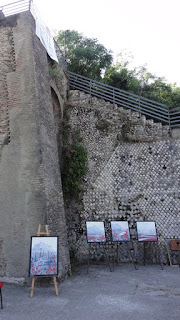 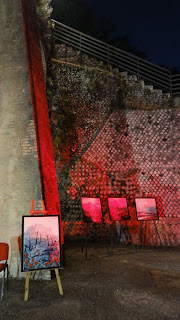 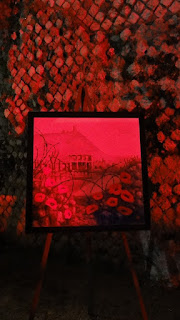 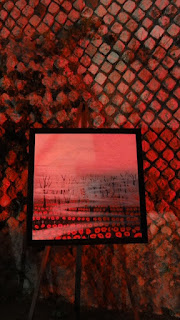 Paintings placed to guide patrons past the screens to the seating at the Teatro Romano provided a thought-provoking entry and helped set the scene for the evening. The limited palette paintings took on an even more tragic hue as the red lights the colour of the poppies drenched the space and reminded us that the mountainside was drenched with the blood of the wounded and killed on Monte Cassino.
Posted by Kay at 03:43 No comments:

"To see ourselves in the light of what we share, rather than what we hold separate, is the purpose of this work" - John Davies.

Tonight (21 June 2013) was the world premier of a New Zealand opera, The Juniper Passion.

Based on a book by John G. Davies, with music by Michael F. Williams, this dramatic comtemporary opera performed in the Roman amphitheatre on the slopes of Monte Cassino was both universal in theme and wonderfully New Zealand in delivery. 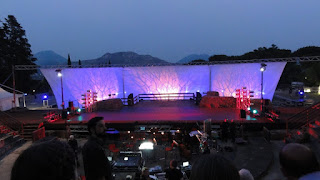 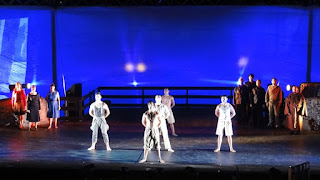 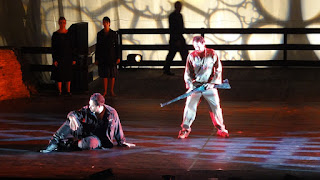 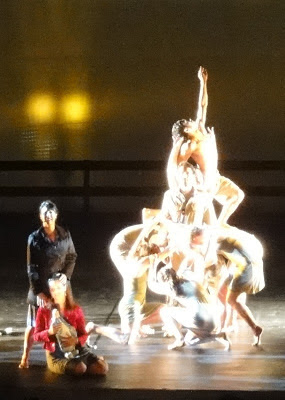 In the booklet outlining the opera John Davies writes:

As a boy I proudly carried the fact that my father had fought in the two great battles of the 2nd New Zealand Expeditionary Force; El Alamein, and Monte Cassino. Of North Africa he spoke of the burning desert by day and the freezing star bright nights. Of Italy he spoke of the mountains, the ruins, the Italians who welcomed them and whom he and his comrades in turn fed, treating the chidlren with chocolate and small gifts. And always he spoke of the men, Snow from Auckland, Joe from Motueka, some of them alive, some having never come home. Even in the last months of his life I would see him turning over in his hands photographs of those long ago faced and places.

Michael Williams and I planned that the ultimate scene of the opera was to be a philosophical interrogation of the Nazi appropriation of Nietzche, Catholic mysticism of the Benedictine kind, and Kiwi self reliance. To interrogate this difference might lead us to an understanding of sameness. To see ourselves in the light of what we share, rather than what we hold separate, is the purpose of this work.

The late Douglas Lyne, my mentor for working internationally for peace through the arts, and founder of the MCFRR group, strongly supported working for commemoration, reconciliation and peace through literature, arts and music. This production would surely have satisfied him, involving script, music, dance and a truly international cast. A moving, sensitive yet powerful performance, the world premier of The Juniper Passion was seen by an appreciative audience at the Teatro Romano on the slopes of Monte Cassino last night.

The Juniper Passion can also be seen in Rome and Nemi, 25 and 26 June.

This year with the Biblioteca Comunale not being available Legato was divided into two venues. This was an interesting exercise for me as curator, as neither venue was designed as an exhibition space. To simplify the task all smaller works were displayed in the Expo space in the Banca Populare del Cassinate, (see previous blog post) giving Legato a main street presence for the first time.

Larger works were displayed in the Sala Restagno, courtesy of the Comune di Cassino. Although space was at a premium I was delighted with the end result, displaying 25 larger works in the conference venues. Works were easily seen by the visitors, and lighting was good. Regular visitors to the Sala commented on how well it looked with the exhibition set up there, breathing new life into the space. 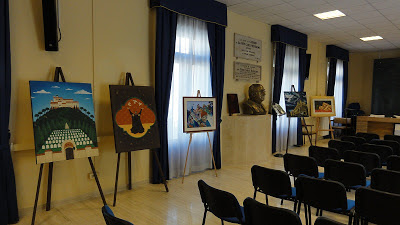 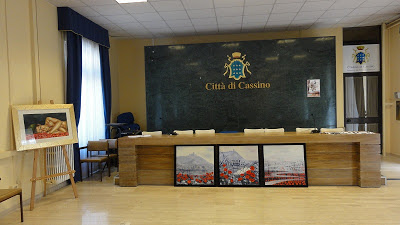 New works by Alessandro Nardone, Caira (Cassino) under a large photograph of Cassino. 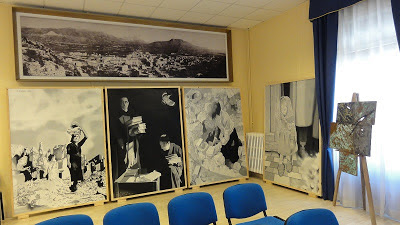 Alessandro explains the imagery in his paintings to a delegation of American visitors from the Texas Division of the US Army. Pictured with the artist is Colonel Charles Aris of the 36th Infantry Division, Texas. 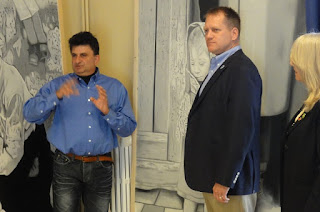 When wall space is at a premium, or walls cannot be used for any reason, the curator must also use the floor! While not ideal from a curating point of view, nor for the artist perhaps, those seated near these works were able to study them well during conventions and meetings. 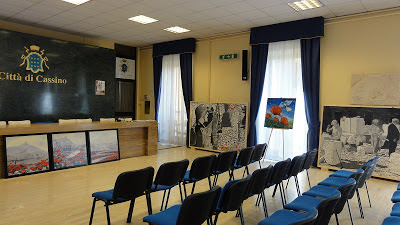 A window space highlights this mixed media work by Sara Antonini. Barbed wire and torn canvas are in stark contrast with the soft curtains and elegant drapes. 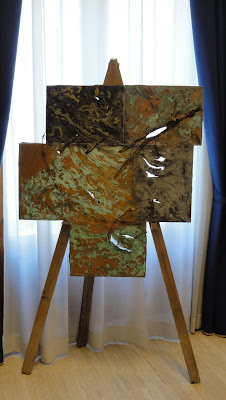 This large mixed media painting by Auckland artist Geoff Tune is also framed by the curtains in a window space.  Nearby is the powerful "Red" by Anna Maria Corsi. This venue allowed the work to be seen also from behind, where the red barbed wire wound around the coat challenges the viewer to think more about the symbolism used and the reality of war. 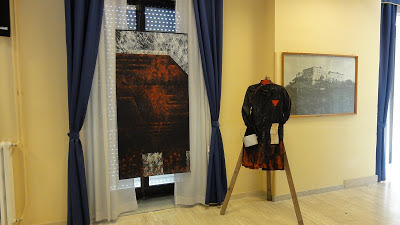 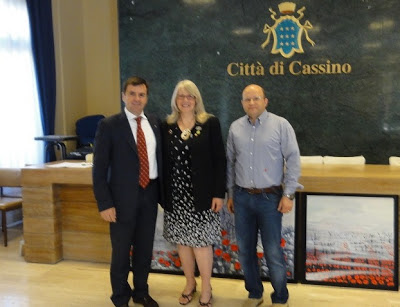 At the closure of the main street Expo venue (Banca Populare del Cassinate) some of the smaller works were added to the exhibition at the Sala Restagno. These included works by Julia Udoratina (Russia/Italy) and Linda Dickens (NZ).

Thanks to Michele Di Lonardo for organising the venue at the Comune, locating the necessary easels, and liaising with Sindaco Petracone and the Assessore della Cultura, Danilo Grossi, on behalf of the Legato exhibitions.