The poppies are in bloom again, growing tall and free in the fields or tightly bound in their plastic bases in memorial gardens. The difference is striking. So too is the difference between a young man full of the joy of life and one lying forever in a foreign land.

This year the New Zealand Embassy hosted the Anzac Day service at the Rome War Cemetery. The day was damp and overcast, fitting the mood in the small but interesting cemetery. There are not many New Zealand soldiers buried here, but those who are there had many visitors and were remembered along with those who are still risking their lives fighting in conflicts today. 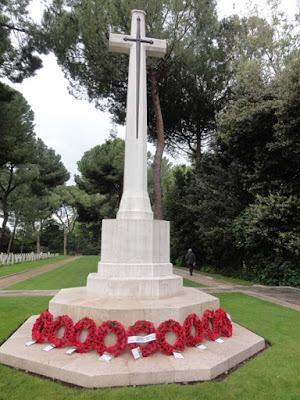 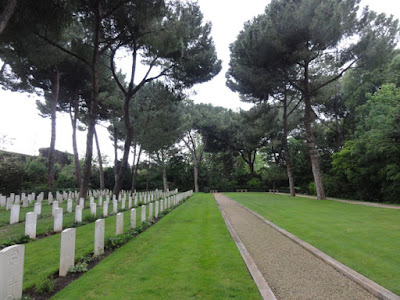 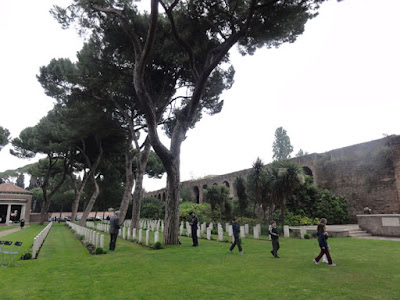 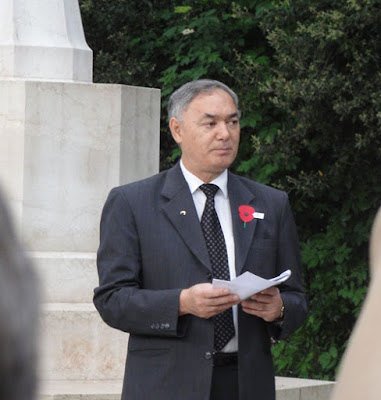 The service was traditional, and wreaths were laid by representatives of 19 countries and organisations. The singing, unaccompanied as earlier rain prevented the use of a sound system, was both prayerful and patriotic.

From the opening prayer in Rome on Anzac day 2011 comes this hope for mankind:
"We ask that the liberty, truth and justice which [the fallen soldiers] sought to preserve may be seen and known in all the nations upon this earth".

One phrase in the closing prayer (Canon David Richardson) struck a particular chord with me, praying for "peace among nations, peace in our homes, and peace in our hearts".

Let us pray for leaders of nations, and for all who are working to promote understanding between peoples, that their efforts may bring about justice, freedom and lasting peace.

Let us pray for those who suffer today as a result of war, terrorism and all forms of violence, that through their suffering we may learn to resolve conflicts without bloodshed.

Let us pray for the men and women of all our countries who have died in war, especially for those who are buried in this place, that their self-sacrificing courage may inspire us to face the difficulties in our time with integrity and goodwill.

Let us remember especially those who this day commemorates, and the contribution they have made to the growth of our nations. May we never forget the ideals for which they have died.

Let us spend a moment in silent prayer asking God for the gift of peace; for ourselves and our families, our communities, and our world.


As I looked at the young piper standing alone behind the cenotaph I wondered how long it would be before he too had to decide where he stood as a peace maker. 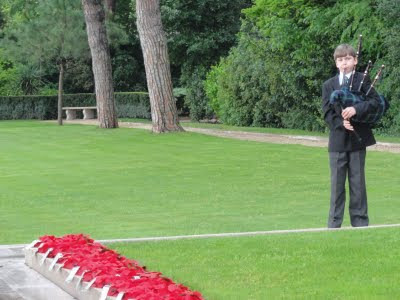 Music, like art, is an effective weapon of choice. Music unites and inspires us to seek greater things. It can also be used to unite to draw strength to attack a perceived enemy. I recall a poster from many years ago: "There are no strangers in this world, only friends I have yet to meet". Let music and art always be used to educate, to forge friendships, to promote harmony, to bring about a lasting peace.
Posted by Kay at 13:35 No comments:

A people sacrificed for peaceful principles recovers its identity and leads by example even in these troubled times:

So deeply committed to their pacifist beliefs and their covenant of peace, that just over 170 years ago, they deliberately refused to abandon their principles in the face of unwarranted aggression, with horrendous consequences. The last "full-blooded" Moriori died in 1933. The Moriori story and Nunuku's covenant of peace, provides a vital message for today's turbulent world.

Peace is not a new concept in the world, just an uncommon one.

My next blog post was to be about education for a culture of peace, with particular reference to the nations who have historically claimed to be peace keepers rather than active aggressors in times of war. I watch daily the events unfolding in Libya, and more particularly recently the involvement of peace loving nations who have somehow become caught up in acts of aggression despite their best intentions. Their citizens are quite rightly expressing their concern at what is happening.

It was timely, for me, to receive a comment in response to an earlier post, which brings to the fore this very issue.

As a child going to school in the 1960s I learned about the Moriori people, the peaceful early inhabitants of New Zealand. We were taught that the Moriori people had all but died out, but that their peaceful legacy was to be admired and upheld. The Moriori people, like many other peace makers, suffered for their principles. They were to be remembered and praised, but was left thinking that as a people they were, sadly, doomed. Their recovery as an identifiable ethnic group with a modern identity which still adheres to these principles is a wonderful example of steadfastness in holding to principles, determination to survive as a people, and of how one can successfully educate for a culture of peace.

Tena ko, I applaud this article as historically accurate. However, the author and indeed all NZers need to know that 500 years before Te Whiti o Rongomai, the Moriori people of Rekohu (Chatham Islands) had observed an ancient peace covenant that remains unbroken by Moriori to this day. Te Whiti would have been aware of the Moriori pacifist doctrine as it was his kinsmen (from Te Atiawa) who had invaded Rekohu and killed/enslaved Moriori in 1835.

Moreover, Moriori had been taken to Taranaki as slaves in the 1840s and 1850s. Moriori also wore albatross feathers in their hair as a symbol of peace and bales of albatross feathers were sent from Rekohu to Parihaka in the 1860s - too many coincidences for there not to be a direct connection between Te Whiti's pacifist doctrine and that practiced by Moriori for many centuries.

It would be nice for folk to acknowledge not just Te Whiti and Tohu as NZ leaders in Pacifism, but acknowledge that they in turn were most likely influenced by the ancient Moriori peace philosophy and practice.

The Moriori website is a comprehensive one, and by following the links you can find useful education resources. The introductory paragraphs on the home page explain the ties with the Maori tribes which are not always understood as we glance over the past, sometimes making sweeping generalisations about passive and aggressive people in our own nation's history.

Remembrance is a useful place from which to develop and promote peace initiatives. The ancient philosophies of the Moriori people are behind the Parihaka International Peace Festival, a movement born from some of New Zealand's darkest days of bloodshed and horror.

Underlying the work of the Monte Cassino Foundation for Remembrance and Reconciliation, and Campagna della Pace, Cassino, under whose wider umbrella the Legato exhibitions evolved, is the Latin maxim "Pax in Spinus", translated into "peace from thorns". It doesn't matter what country you are in, or how bloody the history is, we strive to make peace a common concept. Remembrance is only the starting point; collectively we must educate for a culture of peace.
Posted by Kay at 00:16 No comments: