Ripples Across the Water 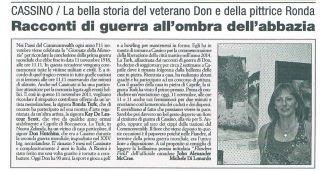 In 2010 Ronda Turk travelled to Cassino with her mother, Mary Howan, and other New Zealand artists and supporters, to exhibit with Legato, to visit Italy, to learn more about the Battle of Cassino, and of course to enjoy the wonderful countryside. Ronda and Mary made the most of their time here walking the picturesque hillsides, exploring the villages, enjoying being "local", experiencing as much of Italian culture as they could.

Using her photographs from this trip Ronda painted her impressions of Italy back in New Zealand. She recently won an award for her "townscape" of Roccasecca, this scene being near the Bed and Breakfast L'Ortica where she stayed.

Ronda's research prior to painting for Legato included interviews with veteran Don Hutchins, who served time in Italy. Don was a private with the 25th Battalion and his job was a Dispatch Rider; he also was a runner for about 4 days during the battle in Cassino. He spent two years fighting in Italy with around five months in Cassino. He was wounded later in Rimini, but returned to battle when he was fit enough. 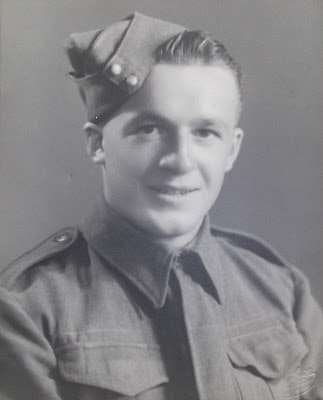 Thanks to the social media of Facebook Michele Di Lonardo of Cassino saw the photograph of Ronda with her winning painting, and contacted her to interview her via Skype. The newspaper article above, published in Cassino in time for Remembrance Day, is the result of this connection.

Thanks to the internet art can certainly make ripples from one side of the world to the other.
Posted by Kay at 15:26 No comments: 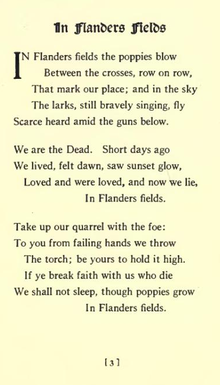 Today is Remembrance Day for many around the world. It is a day marked by the Commonwealth countries, but also recognised by many other countries throughout the world. It marks Armistice Day, the official end of World War I.

I often think of Australia on this day. Shortly, at the 11th minute of the 11th hour on the 11th day of the eleventh month a ray of sunlight will touch the poignant statue at the Shrine of Remembrance, the War Memorial in Melbourne. Five Australians lie in the cemetery in Cassino. One was a journalist; all were doing what their country asked of them.

Whatever we call it, Armistice Day, Remembrance Day, Veteran's day or Poppy Day, it's time to reflect, to remember.

It is also time to look ahead. Now, as much as we ever did, we need to educate for a culture of peace. Here in Europe I hear disquietening rumblings, of movements that are threatening, of strongly nationalist and militant ideology. We can't relax and ignore them, but must be proactive in reaching out to the young people, making links that will bind countries in peace, not divide them in oppressive actions.

Legato is a small movement, but it is one of many. Together we are a positive force. We never know who we reach, or how we do make change. But change does happen, and positive change through any medium is to be supported and applauded.

Works from Legato 2010 are still finding their way home. Today I packed works that were shown again in the 2011 Cassino Legato, and these will travel to New Zealand shortly. The permanent display in Italy is changing slightly as these works are returned to their owners and new ones are added to the collection.

I visited New Zealand works in the Sora school last week, where the teachers and children were overwhelmed by the generous donation of work that didn't go back to New Zealand. I am delighted to be involved in planning the best placement and use of these works so that they form a central part of peace studies in the school.

Follow-up work from 2010 continues, while planning for new events stretches out to 2014. At the moment the Legato collection is being enjoyed by Polish visitors, and these essential links with Poland are being consolidated as I don't speak Polish and need help with the Polish Legato negotiations.

The Polish cemetery on Monte Cassino is undergoing extensive maintenance work. The trees have been removed and will be replaced, and the damage caused by tree roots repaired. While is appears stark in comparison to when the trees were still there it is also now highly visible, and reminds us of the real cost of war.

One thousand young Polish men did not go home from Cassino. Poland suffered terribly during and after the war. I look forward to working with Polish artists for commemoration and peace.
Posted by Kay at 14:51 No comments: