And So It Continues... 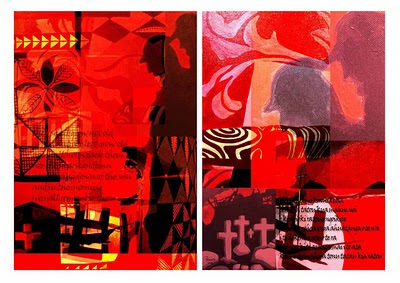 Today the newspapers report that another Italian soldier has been killed in Afghanistan. New Zealand too has lost another national in Afghanistan, killed earlier this month. And so it continues.

It is New Year's Eve, and time to catch up on some blog posts long overdue. I would like to be writing about the art works, the artists, the exhibition. I prefer to write about peace, not war. But, while war continues, it seems that we must work both for peace, and an absence of war. Newspapers question why we are fighting in these places. Others suggest that career soldiers are simply working in a dangerous job, and no more heroes than anyone else killed on a work site.

We say "Don't be a hero" when we are really saying "Come home safely". Is it no more, no less than this? There are people who perform extraordinary acts under pressure, but there is surely no heroism in fighting a war with military presence. Peace comes from building bridges, not bombing them.

While reviewing Legato artist statements for this blog I was struck by the lines at the end of this email from Gilmore Wall of Auckland. Gill's challenging imagery (photo above) bridges the 65+ years from WWII until today.

The Second World War had a major impact on my family with many uncles, cousins and my father serving in all three armed forces in Europe, North Africa and the Pacific. The family lost one cousin in the Battle of Britain as a tail gunner in a bomber, another taken prisoner in the Pacific and my father was wounded in the battle of El Alamein, Egypt which ended his war.

Our uncle Lawrence Gilmore fought all three theatres with 2NZEF from North Africa including Cassino and made it through unscathed only to be sent to the Pacific where his brother (Robert) was. He is one of the last members of his generation of our family still living well into his eighties. He was away from home for five years. Like many of his contemporaries they speak little of their experiences during their time at war and so it remains difficult for following generations to fully understand what it was like. We can only speculate as to how horrific it must have been.

My father told the story of the day the war ended finally in the Pacific and he was on our grandparent’s farm, having just met our mother Isobel Jean (Lawrence’s sister), whence our grandfather collapsed and died in his arms from what must have been pure stress from waiting for his sons to return home. They never got to see their dad again.

My submitted artwork therefore depicts both my wife and my families’ connection with World War II and in particular Cassino. The imagery has been derived both from collections held at the Auckland War Memorial Museum and from personal mementoes telling the story of the coming together of many cultures as one nation protecting our freedom as a way of life. Unfortunately this is a repeated theme in our lifetimes.
We must ask ourselves, as we start the new year, how many more lifetimes will we let it continue? Wouldn't it be great if we had to turn to museums and historians for information about wars, instead of simply picking up a newspaper and turning on the television to watch our bloody history being made?

Mother Theresa said "Peace begins with a smile". Happy New Year, artists and peace workers. We can all be peace workers, join any of the many movements around the world. Bring whatever skills you have, but all you really need to bring is a smile.
Posted by Kay at 05:37